MOOC’s and the Global Transformation of Education- What is the Reality?

Transforming education through technology is nothing new to academics, or for business. In the 1960’s educational television was hailed as the technology that would dramatically change how we teach. At the time, Marshall McLuhan predicted education would be transformed as our society embraced communication technologies.  Over the next fifty years the world would see the combined effects of computer technology, the Internet, on-line learning, and the proliferation of mobile devices.

Today educators and administrators are wrestling with the concept of Massively Open Online Classes, or MOOC’s as they are called.  In a sense MOOC’s represent the culmination of many of the technological advances over the past 50 years.  Just as the public hype began with each subsequent introduction of “latest greatest technology” over the years, today many people are attempting to sort out what the reality and the potential of MOOC’s truly is.

Basically a MOOC is a type of on-line course offered to a large population through the web. While most MOOC’s today don’t offer traditional college credit, many provide some form of assessment and certification to the student.  The goal and hope of a MOOC is to make on-line learning scalable, sustainable, and for some, profitable.

The genesis of a MOOC began in 2007 at the University of Wisconsin-La Crosse when math Professor Dr. Bob Hoar, created the IIURL, the Institute for Innovation in Undergraduate Research and Learning.  It is here Professor Hoar, his math colleagues, and technologists began creating a large collection of on-line learning objects or vodcasts (video podcasts) to help students enhance their math skills. 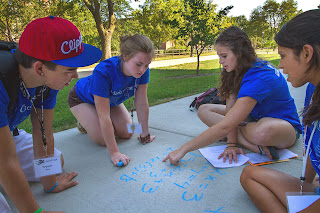 The concept was taken a step further in 2012 with the creation of FastTrack, a program to help students take a refresher in math skills, rather than having to take a remedial math class.  Dr. Hoar says, “The FastTrack math program, from the student’s perspective means they are going to get out faster, which makes education cheaper.” Adding another year to college whatever class you are taking gets more expensive. The program helps students refresh their math skills, helps save money, and helps the students get through school at a faster pace.
For some students, struggling with math sometimes “causes students to walk away from the university,” added Hoar.

The positive aspects the FastTrack go well beyond math.  Dr. Hoar points out, “Studies in chemistry and the sciences on student performance show students who are struggling in math are less likely to perform well in their classes.” The FastTrack math program highlights just one discipline which can help students perform better in science classes.  Hoar points out, “As far as remedial college readiness I think you can walk around any campus and ask every faculty member if you wish students should do a few things before they show up on campus. They would all have a list.”

After the first year, the assessments from the FastTrack program were impressive. Of the first cohort, 37 out of 38 students moved from a requirement to take remedial math to placement in a traditional level math class.
Enter the MOOC idea.

In 2012, with a solid concept and assessment data in hand, Dr. Hoar in collaboration with the University of Wisconsin System applied for and received a Bill and Melinda Gates Foundation for $50,000 to develop at MOOC at the developmental math level, and provide it free on-line to anyone.  Dr. Hoar reflected that what would take a 20 month process was compressed to just 20 days. It was the FastTrack concept that helped him apply for the grant quicker. Once the grant award was announced, officials began offering supportive data on why the MOOC concept could provide multiple benefits to students.

According to the UW System, approximately 21% of all new freshmen need some remedial math education when entering college. This mirrors national statistics showing the percentage of high school graduates who don’t have the required skills to succeed in college-level mathematics courses.

Mark Nook, UW System Senior Vice President for Academic and Student Affairs commented, “One of our main strategic goals is to help Wisconsin create a stronger workforce. Math skills are a key ingredient to success in college, and in work. Many students who have the drive to earn their UW degree are just missing that one piece of math confidence, and this can help.”

For Dr. Hoar, the Gates Foundation provided the opportunity to bring the traditional classroom experience into an on line course on a much larger scale. He commented, “The MOOC made us think beyond our campus, and beyond UW System. The Gates Foundation grant allows us to open our eyes even wider.” As of January 2013, over 1000 students have registered for his College Readiness math MOOC. For Dr. Hoar, that already is a success. “I probably should be nervous with the increasing numbers, but everybody sees the value of this program. People are now seeing enough value to invest into it.”

The concepts proven in the FastTrack math program are being put to practice. Interactive video segments are being created by Associate Lecturer Maggie McHugh, and content expert Associate Professor Jen Kosiak, who also is the 2012 recipient of the Teacher Educator of the Year from the Student Wisconsin Education Association.  The videos are being shot and edited and eventually will be placed on YouTube as well as web streamed on Mediasite. Some classroom activities are being planned to be streamed lived worldwide to help make the experience more interactive and immediate.

The students enrolled in the College Readiness Math MOOC are diverse in location and in background.  Dr. Hoar points out, “Some students are preparing for their first college math class. I’ve had entire high school classes enroll, an eleven year old student, and an 83-year old grandmother wanting to improve her math skills so she could teach her grandkids, all for free.” 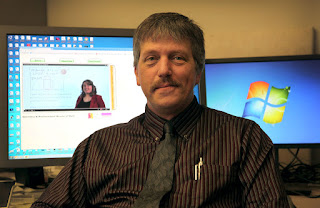 And what about the reality of the MOOC?  Dr. Hoar points out that everybody wants a well prepared student. He continued saying, “MOOC might change colleges. We do see that with on line classes as students transfer credits from larger number of other institutions, particularly in the summer. We need to realize that we need to transform a little. It’s not a bad thing. Content from many large lectures might translate well for MOOC’s translating that to students in labs may not work as well.”

Dr. Hoar says we need to test the “MOOCability” of the teaching before rushing to embrace the technology. Some teaching and learning may translate very well to a MOOC, other activities may not.  We need to test the concept before making wild assumptions and claims, similar to what has happened with technology and communications that McLuhan described, and the resulting technology hype reported over the years. Education will surely be transformed once again.  Our challenge will be to carefully embrace the new technology through careful planning, implementation, and assessment.  This particular MOOC seems to be following the correct path to scalability, sustainability and perhaps someday, profitability.
Posted by Unknown at 4:08 PM