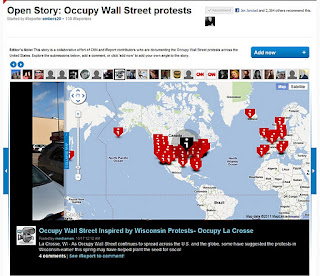 When hearing the news media talk about Occupy Wall Street #OWS , it is important to look deeper into what the movement means on a global and personal scale. One attempt to gain a better understanding of the OWS phenomenon, and to provide some context to the discussion, is through an innovative use of CNN's iReports. Anyone can become an iReporter. Basically, after signing up for an account, an individual anywhere in the world with Internet access or a cell phone can immediately upload a photo, video, or narrative of what they are experiencing. It brings important global and local issues to the forefront, anytime, anywhere, and about anything of importance to the iReporter.

For OWS, CNN iReporters were asked to report on their impressions on the issue. This provided an opportunity to research the use of social media in politically charged environments, and how OWS affects people's lives. In this example, a person in La Crosse, WI was interviewed on how 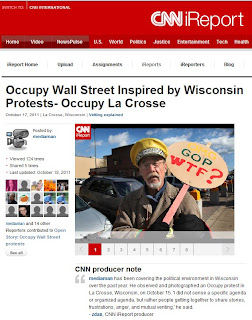 Occupy Wall Street Was Inspired by the Wisconsin Protests affected him. In the article, Craig explained that the political protests in Wisconsin help to inspire the people in New York to begin the Occupy Wall Street efforts. He continued by saying that he is been unemployed for over a year. In his words, "We need to connect the dots from what is happening in Wisconsin, to what is happening in New York." Through the iReports, we can gain some context on OWS throughout the world through the personal stories of those who are affected. Social media provides the mechanism for us to better understand issues, and people.
Posted by Unknown at 9:15 PM