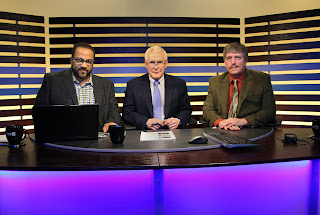 On April 16, 2013 Dr. Bob Hoar, Math Professor at the University of Wisconsin-La Crosse and Jim Jorstad, Director of ITS/Academic Technologies, presented a live webinar at the corporate headquarters of Sonic Foundry in Madison, WI.  Sean Brown, Vice President of Education at Sonic Foundry moderated the event, with over 1200 on-line viewers from across the globe participating and posing questions. It was the one of the largest on-line web streaming international audiences Sonic Foundry has ever sponsored.

Jim described the essence of a MOOC as a type of on-line course which is offered to a large population through the web. The goals of a MOOC can be best explained by three main core concepts including how scalable, sustainable, and if the course can someday be profitable. 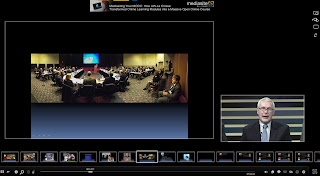 Academic institutions and corporate partners are wrestling with each of these goals as they consider the potential of MOOCs.  In addition it is important to consider the "MOOCability" of the the course- in other words can a course be transformed into a MOOC or not?  Some academic disciplines naturally lend themselves to being converted into a MOOC, such as math course.  However certain science lab courses may not translate well into a MOOC.

There are seven core strategies for a successful MOOC which include:

In this Math MOOC project, a Bill and Melinda Gates Foundation Grant in concert with UW-La Crosse and UW System, "helped to open our eyes" to a worldwide audience for our math MOOC. UW-La Crosse utilized Mediasite streaming technology to promote, explain, and disseminate the MOOC concept on-campus, throughout the U.S. and across the globe.  Web streaming was also utilized to hold live class office hours so that students could interact with the faculty, as well as with other students.  Polling options within Mediasite provided additional interactive feedback. Comments and questions were collected via an e-mail address dedicated to the course web stream. 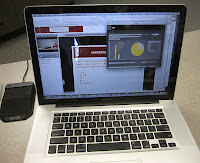 Using this technology helps to make the remote student feel more a part of the learning environment by engaging them into the teaching and learning experience. If the student cannot participate live in the event, they can watch the program on-demand anytime, anywhere, where there is a computer and Internet access.  Having this feature available helps the students connect with a particularly wide MOOC audience for this project. The age groups for this MOOC extends to an eleven year old student, entire high school classes, to a 83 year-old grandmother.

Dr. Hoar explained the importance of a well-defined team which included Maggie McHugh who is the lead instructor, Jenn Kosiak, a math education expert, Jim Sobota, a professor emeritus who helped to inspect the modules, and Cari Mathwig-Ramseier who served as the intelligent agent to integrate the MOOC into a LMS, which is Desire2Learn. 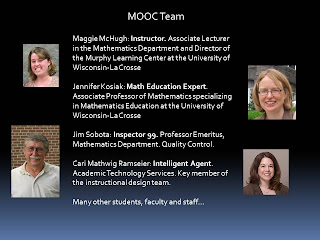 Dr. Hoar pointed out that the success of the first MOOC was the previous work completed in the FastTrack on-line math program. In this project, 38 high school students enrolled in a summer camp that included on-line math modules. In the end 37 out of 38 improved their math scores which allowed them to avoid having to take a remedial math class as Freshmen.  This saved the students from having to pay for credits to take a remedial math course, and also saved them time for not having to take the course.  It also better prepared them for future science classes as they went through college. 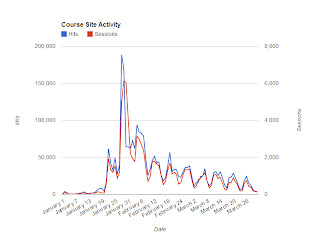 According to Dr. Hoar, the MOOC web site at one point  reached nearly 200,000 hits in one day, and the average grades for students in each module improved dramatically from the original pre-test.  Jorstad commented that through social media, information about the MOOC project was disseminated worldwide through a number of social media channels such as Twitter, blogs, and web streaming. Analytic data was tracked in tandem with the data gained through the MOOC course itself. 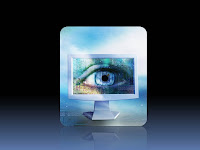 Dr. Hoar added that for a successful MOOC you "need to assemble the right team, provide support so that the faculty, staff, and students can develop the materials, and pick a course topic that is important."  If you are follow each of the recommendations highlighted, you are well on your way for a very successful MOOC. More math MOOCs are planned for UW-La Crosse with the support of UW System.
Posted by Unknown at 10:19 PM